Author and photographer James W. Fiscus, administrator of the Endeavour Awards, died unexpectedly at home on November 7. He was 76.

Fiscus spent decades as a SFWA volunteer. He hosted SFWA’s hospitality events at Westercons in the early 1990s. Later he began writing a column for the SFWA Bulletin looking at the business and legal aspects of the publishing industry. He oversaw a review of the SFWA Handbook from 2002-3.

In 2008, SFWA President Russell Davis appointed Fiscus to succeed him in the position of Western Regional Director, a position Fiscus held until the California re-incorporation, at which time he became a Director-at-large until 2015. During his time as a Director, Fiscus served as Chair of the Orphan Works Committee. When it was re-formed as the Legal Affairs Committee, Fiscus continued as co-Chair with Michael Capobianco. Fiscus also joined the Contracts Committee in 2014, and took on its leadership when the former chair stepped down. SFWA honored him with the Kevin O’Donnell Jr. Service to SFWA Award in 2017.

Fiscus’ first published sf story was “A Time of Martyrs” in Carr and Pournelle’s 1986 anthology Warrior. Another half-dozen short stories he wrote – several of them alternate history – appeared from 2004-2008 in anthologies edited by Harry Turtledove, Martin H. Greenberg, and others.

He was born in Oregon, where part of his family had lived since the 1840s. He was raised in England, Baltimore, Manhattan, New Haven, and occasionally in California, returning to Oregon for high school.

He interrupted his studies at Lewis and Clark College in 1967 to volunteer for the Navy, serving in Vietnam and Okinawa. He eventually returned to finish his undergrad work, then freelanced as a photojournalist for most of a decade before entering Portland State University to earn an MA in Middle East and Asian History in 1987.

He was Oregon/Washington correspondent for The Medical Post (Toronto) and The Medical Tribune (New York), and wrote history books for high school students.

He also wrote Meet King Kong (Famous Movie Monsters), a book on the making of the original King Kong. His other non-fiction works include The Suez Crisis (War and Conflict in the Middle East), Iraqi Insurgents: Resisting America’s Nation-Building in Iraq (Frontline Coverage of Current Events), America’s War in Afghanistan (War and Conflict in the Middle East), and Coping With Growth Spurts and Delayed Growth.

He served as Editorial Director and Media Relations Manager for the National Resource Center for Safe Schools in Portland and as Senior Public Relations Specialist at Legacy Health System in Portland.

Fiscus also held two long-term volunteer posts for Oregon Science Fiction Conventions, Inc., a nonprofit group that hosts OryCons, and other events. He chaired the Endeavour Awards, which annually honors a book by a Pacific Northwest author. And he chaired the board of trustees of the Clayton Memorial Medical Fund, named for the late Jo Clayton, which provides grants to Pacific Northwest genre authors for medical emergencies.

He is survived by his wife, Shawn Wall. 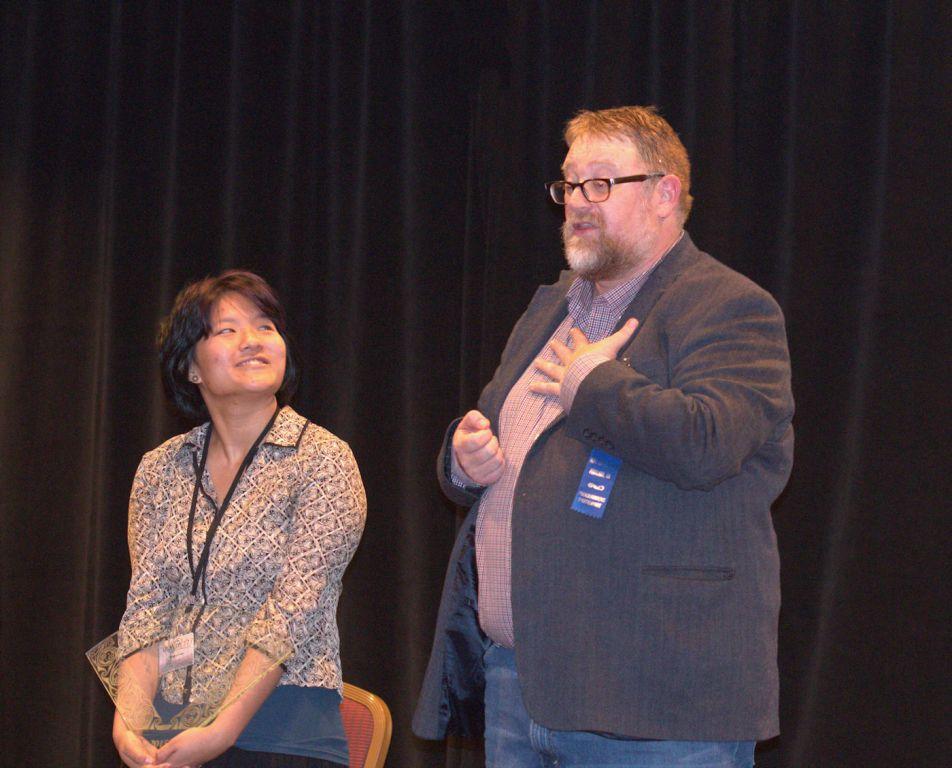 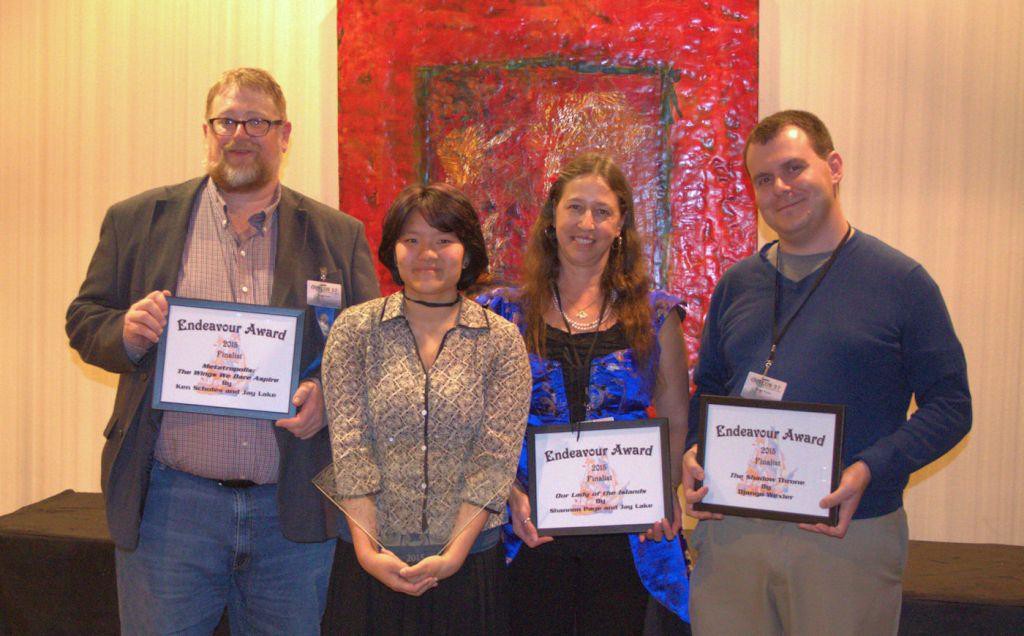 Thanks to Jim Fiscus for these photos and captions. The news post about the award is here.

James W. Fiscus has sent along several of his photographs taken at the Endeavour Award presentation on November 27 during OryCon in Portland, Oregon.

James Fiscus, chair of the Endeavour Award, will be raising money through an online auction of two figurines donated by Ursula K. Le Guin:

A while ago, Ursula Le Guin donated two figurines to us that she was given by Hayao Miyazaki. They are of a Gardener from in the Sky and the Castle from Howl’s . We’re going to auction them on e-Bay, with the auction starting on November 21. There’s full information about both the Award and the figures on our Web site: www.osfci.org/endeavour.