More pictures by Rich Lynch after the jump.

END_OF_DOCUMENT_TOKEN_TO_BE_REPLACED

The Dublin Convention Centre is too small for the size of this convention.  By a lot.  Thursday was chaos in the halls leading into the meeting rooms.  Packed solid with people trying to exit rooms where panels had ended and others who were wanting to get into those same rooms for the next round of panels.  Convention Centre staff became the traffic police in a mostly vain attempt to keep everybody moving.

By Friday the chaos had abated by a bit, but there have still been severe people flow problems.  Overnight each floor of the Convention Centre was taped off into queue lanes, one for each meeting room.  It’ll not quite an airport boarding lounge situation but very similar.  And this created addition confusion until, finally, everybody started to figure it all out.  But this system created lots of delays and there are usually lines of people waiting access for some rooms even after the scheduled panel  starting time.

This has resulted in plenty of people with frayed tempers, from what I’ve observed, but no meltdowns.  At least for now but there are still three days to go.

One other thing I observed— the traffic police are not to be messed with!  More than one person was firmly directed to clear out of some area where queues would be forming.  Don’t think anybody has dared to jump a line after seeing them in action!

Panel opened with round of applause for Silverberg when he stated that this is his 66th Worldcon.  He has the record, I think.

Bill Burns and Geri Sullivan.  Unsurprisingly, most everybody in the room not only knew about the site, they also were frequent visitors.  And many of us even have Fanzines hosted by the site!

…was held in Oscar Wilde’s House.  There was even a docent tour. 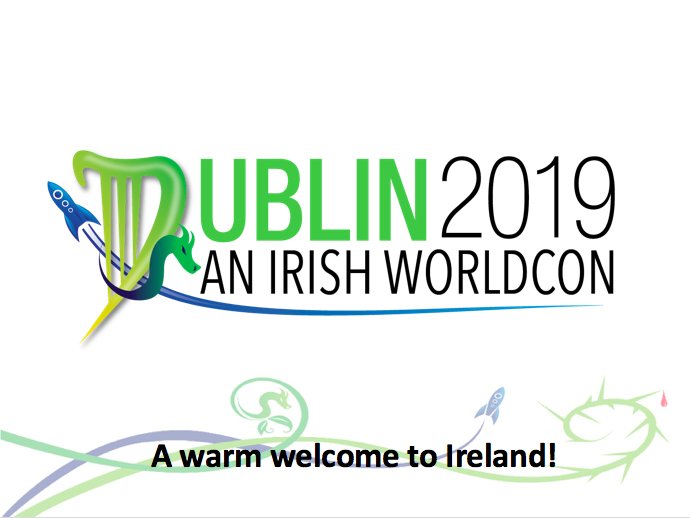 For the first time in history of the World Science Fiction Convention (Worldcon) the convention will take place in Dublin, Ireland.

Today, Dublin was confirmed as the 2019 location by site selection voters at Worldcon 75 in Helsinki. Worldcon 75 reports 1,227 votes were received.

Dublin 2019 will take place at the Convention Centre Dublin from August 15-19, 2019. The Guests of Honour range from writers to scientists and beyond – Bill and Mary Burns, Diane Duane, Ginjer Buchanan, Ian McDonald, Jocelyn Bell Burnell, and Steve Jackson.

The whole team are delighted to be bringing the Worldcon to Ireland for the first time. It’s a huge achievement and we are very proud to be able to welcome thousands of fans to this beautiful country that is steeped in storytelling. We have fantastic guests and we will building an exciting programme covering all aspects of science fiction, fantasy and horror in all media, including prose, comics, art, film, cosplay, science, TV to name a few in what will be a fabulous celebration here in Dublin.

The Worldcon is held in a different city every year and usually has around 5,000 attendees from around the globe.  Some of the highlights of the five day event include the Hugo Awards, the Masquerade and programming that runs all five days with over a thousand items including panels, talks, workshops, films, autograph sessions and more.

We are thrilled to announce Professor Dame Jocelyn Bell Burnell as a #Dublin2019 Guest of Honor! pic.twitter.com/uaqnJRoVWj

We are thrilled to announce Ginjer Buchanan as a #Dublin2019 Guest of Honor! pic.twitter.com/tVTioPX6XT

We are thrilled to announce Mary and Bill Burns as #Dublin2019 Guests of Honor! pic.twitter.com/4mgitHxWBg

We are thrilled to announce Diane Duane ( @dduane ) as a #Dublin2019 Guest of Honor! pic.twitter.com/FcZTQjVrdK

We are thrilled to announce Steve Jackson (@SJGames) as a #Dublin2019 Guest of Honor! pic.twitter.com/3sjVGBo2GM

We are thrilled to announce Ian McDonald (@iannmcdonald) as a #Dublin2019 Guest of Honor! pic.twitter.com/5qKx0SM52A

Memberships prices for #Dublin2019 are listed below and can be purchased at https://t.co/jT7GVsZJSJ starting soon! pic.twitter.com/KMcmN5qnZh