The Furry Writers’ Guild announced the 2021 Cóyotl Awards winners at Fur Down Under on April 29.

The Furry Writers’ Guild posted the nominees for the 2021 Cóyotl Awards on March 17.

* Despite the ‘Novel’ in the title, novella at <50,000 words; all votes tallied only from Novella results.

The Furry Writers’ Guild named the winners of the 2020 Cóyotl Awards in a livestreamed ceremony on May 8.

The awards are given for the best anthropomorphic fiction of the past year. View the awards announcement video here.

[Thanks to Cassie B. for the story.]

The Furry Writers’ Guild posted the nominees for the 2020 Cóyotl Awards on March 1.

The Furry Writers’ Guild announced the winners of the 2019 Cóyotl Awards via Periscope on July 8.

And kudos to Gre7g Luterman for scoring a trifecta this year by winning a Cóyotl Award, Ursa Major Award and  Leo Literary Award for his novel Fair Trade.

The Furry Writers’ Guild posted the nominees for the 2019 Cóyotl Awards on March 1.

(1) UNREAL/UNFIT/UNFINISHED. Yoon Ha Lee observed that Unreal / Unfit magazine, which aroused the ire of writers by listing and scoring their rejected submissions, continues to respond defensively (or offensively) to complaints. Thread starts here.

David Steffen of Diabolical Plots tweeted another observation: “Convenient that comments posted on thinkerbeat from writers who dont like the practice mysteriously disappeared!”

(2) FURRY AWARD LOSES LEADER. Mary E. Lowd resigned as chair of the Cóyotl Awards in January. The awards are given for excellence in anthropomorphic literature.

After a great deal of soul searching, I must regretfully step down from chairing the Cóyotl Awards. I apologize for the awkwardness of this timing with awards season at hand. Unfortunately, until the season arrived, I didn’t realize how much the newer commitments in my life (among others, editing the furry e-zine Zooscape and a 3-book deal for a space opera trilogy) had conspired to take up every last minute of my time for the foreseeable future, extending into the next few years.

The Cóyotl Awards have survived awkward transitions before. The year when I took over, we held voting for two years’ worth of awards at once and hosted a double awards ceremony to cover the previous year that had been missed. So, even if this transition is rocky, it is survivable.

(3) THE HISTORIC RECORDS. Fanac.org has posted video of Dave Kyle being interviewed by Joe Siclari in 2012.

Dave Kyle was an enthusiastic and productive science fiction fan and professional, with an 80+ year tenure.

In this 2012 interview conducted at Philcon 2012, Dave talks about how fandom started, the first Worldcon, fandom in the 1930s (and 40s and 50s and …), the Science Fiction League, decades of controversies, Gnome Press, chairing his Worldcon and much, much more.

The interviewer, Joe Siclari, is an able and knowledgeable fan historian, and asks all the right questions.

Thanks to Philcon 2012 and Syd Weinstein for providing the video.

Raymond A. Palmer began his pioneering work in science fiction fandom in 1928 at age 18. In 1938, his amateur accomplishments as a club organizer, fanzine publisher, author, editor and promoter of science fiction launched his professional career when he became editor of the iconic pulp magazine Amazing Stories. This is his story, an excerpt from The Visual History of Science Fiction Fandom, Volume One: The 1930s.

In New Model Astronauts we take a look at how Hollywood’s perception of the astronaut as mythical figure has changed and continues to do so. Our other main story, Boldly Going, takes a look at how what we remember something as being and what it was changes over time and what that means for us as viewers in a modern age.

This week’s Signal Boost includes  Zinequest 2 by Kickstarter. You can find them here. Also this excellent piece by Dave Jeffrey from the always-great Ginger Nuts of Horror on the way horror fiction deals, or too often fails to deal, with mental illness. We’ve also got Better Than IRL, a collection of writing about what it’s like to find your chosen family online. and TG Shepherd going through the John Wick movie fight scenes 30 seconds at a time. Then there’s Dominion: An Anthology of Black Speculative Fiction, and the Princess World RPG and live plays and podcasts from Haggis and Dragons.We also have John Miereau‘s Serving Worlds and an excellent new Magnus Archives fan project.  lilnan’s work is amazing and this is going to be something special.

Finally, the brilliant Tim Niederriter has work in a StoryBundle right now. Do check it out and fellow Word Make Gooder, Kat Fowler is part of a really fun D&D livestream you should check out. They’re on Twitch and YouTube..

…Inadvisable behavior is a well-known trope in horror films and fiction, whether it’s investigating strange noises in the basement, or splitting up, or ignoring enormous neon warning signs.

But how do real humans react in those situations? How would I, someone who writes horror fiction for a living and who is in possession of a long list of rational and irrational fears, react?

Not much differently, as it turns out….

(7) NEGATORY, GOOD BUDDY. Snopes is called upon to answer the question “Is the ‘Umbrella Corporation’ Logo Oddly Similar to a Wuhan Biotech Lab’s?”

The fictional “Umbrella Corporation” from the game “Resident Evil” shares a logo with a biotech lab in Wuhan, Hubei Province in China, where a new coronavirus is believed to have originated….

(11) BAKED BOOKMARK. Does Cambridge make library users take an oath, like the Bodleian does? If so, I guess they better add a prohibition about snacks: “Librarians stunned after opening 500-year-old Tudor manuscript and finding a half-eaten 50-year-old biscuit” reports The Sun.

The find stunned staff and academics at Cambridge University.

It is believed a clumsy schoolboy dropped what appears to be a chocolate chip cookie while leafing through the book more than 50 years ago.

The manuscript — which dates back almost 500 years — was given to the university by a grammar school in 1970.

The 1529 volume from the complete works of St Augustine is stored inside the university’s rare books archive, where no food, drink or even pens are allowed.

(12) GETTING READY FOR ST. AQUIN. “Catholic leaders call for ethical guidelines around AI” – Axios has the story.

Catholic leaders presented Pope Francis with a broad proposal for AI ethics, education and rights on Friday as part of an AI conference at the Vatican in Rome.

Why it matters: Algorithms are already starting to replace human decision-making, but ethicists and activists say now is the time to speak up on the values those algorithms should embody.

Driving the news: Members of the Pontifical Academy for Life, a group of scholars that studies bioethics, are calling for AI to be developed in a way that protects the planet and safeguards “the rights and the freedom of individuals so they are not discriminated against by algorithms.”

Octopus-inspired robot can grip, move, and manipulate a wide range of objects

Of all the cool things about octopuses (and there’s a lot), their arms may rank among the coolest.

Two-thirds of an octopus’s neurons are in its arms, meaning each arm literally has a mind of its own. Octopus arms can untie knots, open childproof bottles, and wrap around prey of any shape or size. The hundreds of suckers that cover their arms can form strong seals even on rough surfaces underwater.

Imagine if a robot could do all that.

Researchers at the Harvard John A. Paulson School of Engineering and Applied Sciences (SEAS) and Beihang University have developed an octopus-inspired soft robotic arm that can grip, move, and manipulate a wide range of objects. Its flexible, tapered design, complete with suction cups, gives the gripper a firm grasp on objects of all shapes, sizes and textures — from eggs to iPhones to large exercise balls.

(15) OFF BROADWAY. Last night on Saturday Night Live the sketch “Airport Sushi” has the Phantom of LaGuardia emerging to warn someone boarding a flight at LaGuardia airport that he really shouldn’t eat the airport sushi.

Reynolds owns Aviation Gin, and the recent ads for the alcohol company have been nothing short of hilarious… Now, Reynolds’ latest ad, which features his voiceover, is celebrating Leap Day, which happens every four years in February. Of course, that means folks born on February 29th have an especially interesting birthday. In the new ad, Reynolds enlists a woman who was born on Leap Day 84 years ago, which means tomorrow is technically her 21st birthday.

The Furry Writers’ Guild presented the 2018 Cóyotl Awards at Furlandia in Portland, OR on May 25. The awards are given for the best anthropomorphic fiction of the past year.

The Furry Writers’ Guild posted the nominees for the 2018 Cóyotl Awards on March 16.

Voting is open to members of the Furry Writers’ Guild through Friday, May 17th at midnight Pacific Time.  The final winners will be announced at Furlandia in Portland, OR over the May 25 weekend. 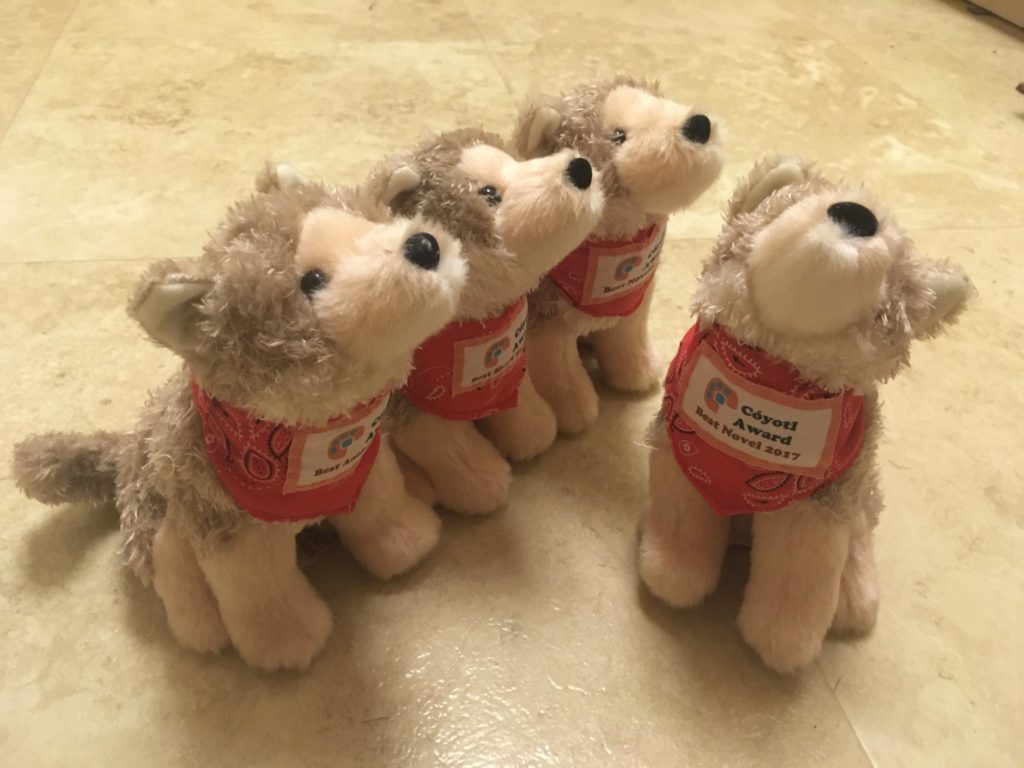 The 2017 Cóyotl Awards. for the best anthropomorphic fiction of the past year, were announced May 25 at the Furlandia convention in Portland.