Louisa’s contributions to the field of fairy tales in Australia are extensive so I am only going to summarise some of the points from the extensive nomination she received this year:

Writer of short stories and memoirs

Co Editor of the Ezine

Administrator and leader: Ring Leader of the Victorian Fairy Tale Ring, and AFTS President for many years.

“While Louisa has achieved many extraordinary things I believe it is her extraordinarily kind heart and passionate support of those around her that needs to be recognised and celebrated with this award. Out of anyone I’ve ever met, Louisa is the truest of fairy godmothers.”

You can read much more about her service, achievements, and creativity in her 2021 nominee citation.

Here are some of the things mentioned by their nominators:

~ Her knowledge of Australian fairy tales and ability to weave and tell a tale, modify a tale to add an Australian essence and encourage all to participate in fairy-rings is totally amazing!

Louisa served on the AFTS committee of management for many years, including her time as President, and founded the Victorian Fairy Tale Ring. She not only organised and/or performed in several AFTS conferences and seminars but also pushed for funding in areas that continue to bear fruit for the fairytale community, and introduced a lot of members to each other, stimulated intercultural dialogue (e.g. hiring a storyteller from Singapore as Keynote), and fostering interstate collaborations across disciplines (writing, music, visual art) that nourished the anthology as well as other productions.

The Monash Fairy Tale Salon was another of Louisa’s Australian involvements, prior to and overlapping with the formation of Australian Fairy Tale Society. She encouraged MFTS members to also join AFTS and provided a lot of assistance, performing in ‘An Afternoon in Fairyland’ at the Sir Louis Matheson Library, Monash University (Rare Books Collection) 2013, The Glen Eira Storytelling Festival 2014, and again in 2015 for the 150th Anniversary of Alice’s Adventures in Wonderland.

~ As well as the big gestures of support, there are many small acts of kindness that enrich the lives of our community. Louisa  takes many fairies under her wing, purchasing train tickets for travel, meeting and introducing them to others, and helping people with their English in the academic realm and fairy tale activities.

~ Out of anyone I’ve ever met, Louisa is the truest of fairy godmothers

Serene is also a remarkable Committee member. She is responsible for the launch of the AFTS merchandise, investing enormous quantities of time in research to decide on Redbubble as the best platform, and basing her decision on AFTS values of sustainability, local investment, and responsible use of our funds.

~ Because of her books, many more people understand the layers of fairy tales.

~ Her glass art has interpreted fairy tale motifs through an unusual medium to be known and enjoyed by many.

We are so glad to be able to acknowledge Lorena’s many gifts though this Award: her unique artwork, her wonderful and enchanting collaboration with Kate Forsyth, her willingness to share her art in AFTS events, and her insights and expertise to the general community, as well as all the wonderful and life-enhancing connections she have made within our Society.

“Lorena illustrates books by Australia’s leading fairytale authors such as Kate Forsyth and Sophie Masson, along with her own book of illustrated fairytale quotations, Wiser than Evening.

“Lorena is a respected presenter, often called upon to speak about visual storytelling, creating art in the Australian landscape, and feminism in myth and fairy tales.”

“She has published a range of fairy tale books and retellings and shared these generously with AFTS members, and has attended most of the Sydney fairy tale rings always contributing very interesting perspectives and content.”

“Serene is a quiet achiever.”

“Juliette Marillier is a fabulously successful historical fantasy writer, working out of Western Australia. She wrote the Sevenwaters double trilogy, and 16 other full length novels, steeped in fairy tale lore. She has won 14 major writing awards and I am always amazed that so few Australians know she is Australian.”

”Juliette’s stories are based on Celtic tradition, she is retelling fairy tales that are important to Australians raised in that tradition. Her heroes and heroines suffer but continue to strive to help each other even in the darkest times. Her love stories are epic..”

“Marillier has helped bring a new generation of readers back to folklore and fairy tale retellings.”

She’s served on the organization’s Committee, frequently contributed to its Ezine, and presented seminars.

Below is the Award’s frog sculpture created by Spike Deane, a fairy tale artist at Canberra Glassworks. 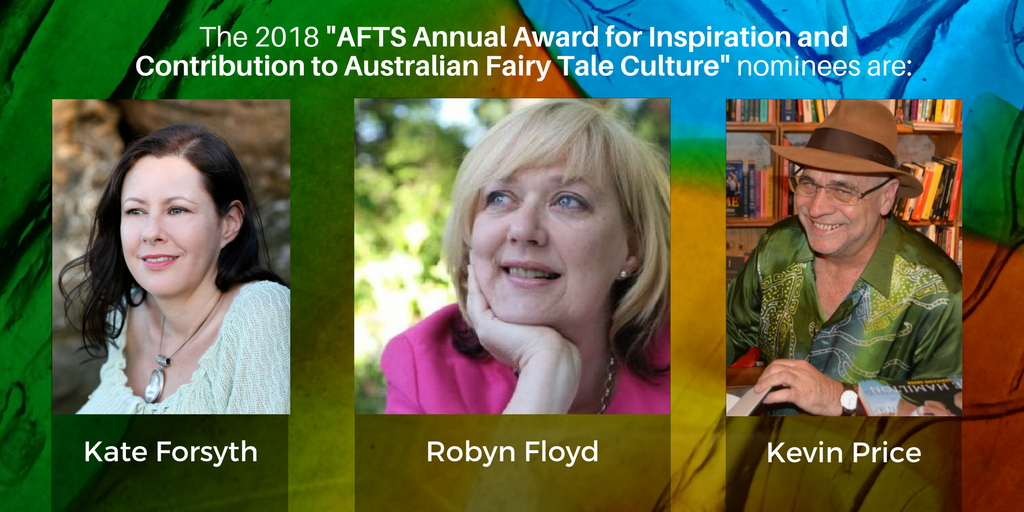 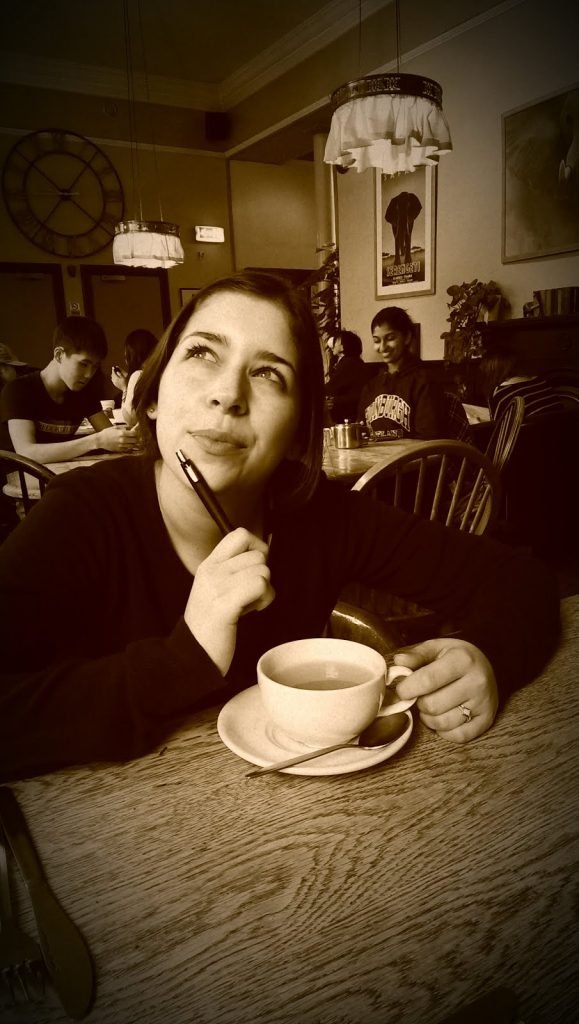 The perpetual award trophy was designed by Spike Deane. 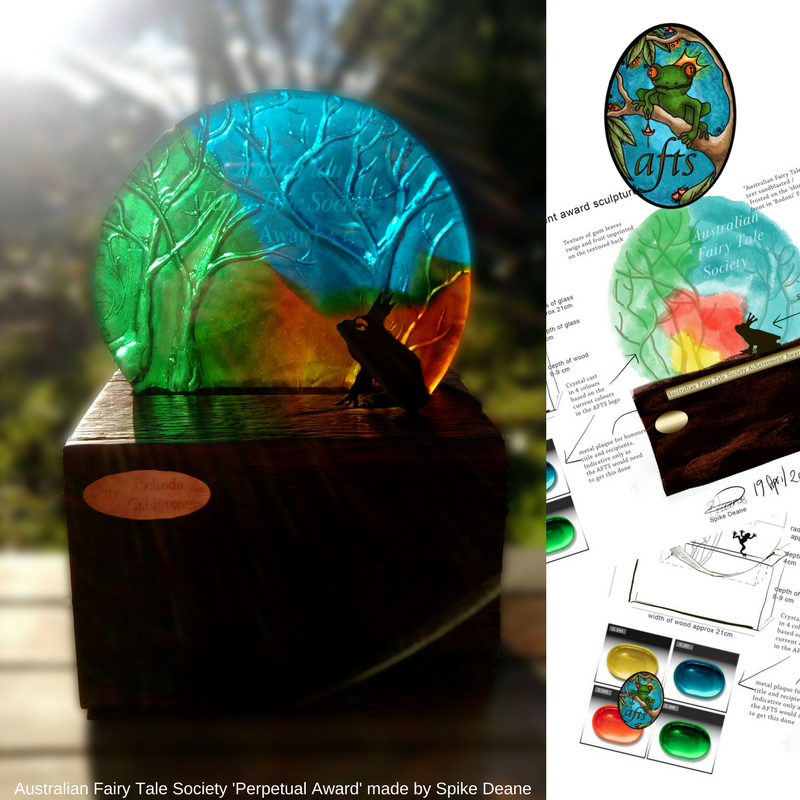 Calderone was also presented with an original painting by Erin-Claire Barrow to take home. 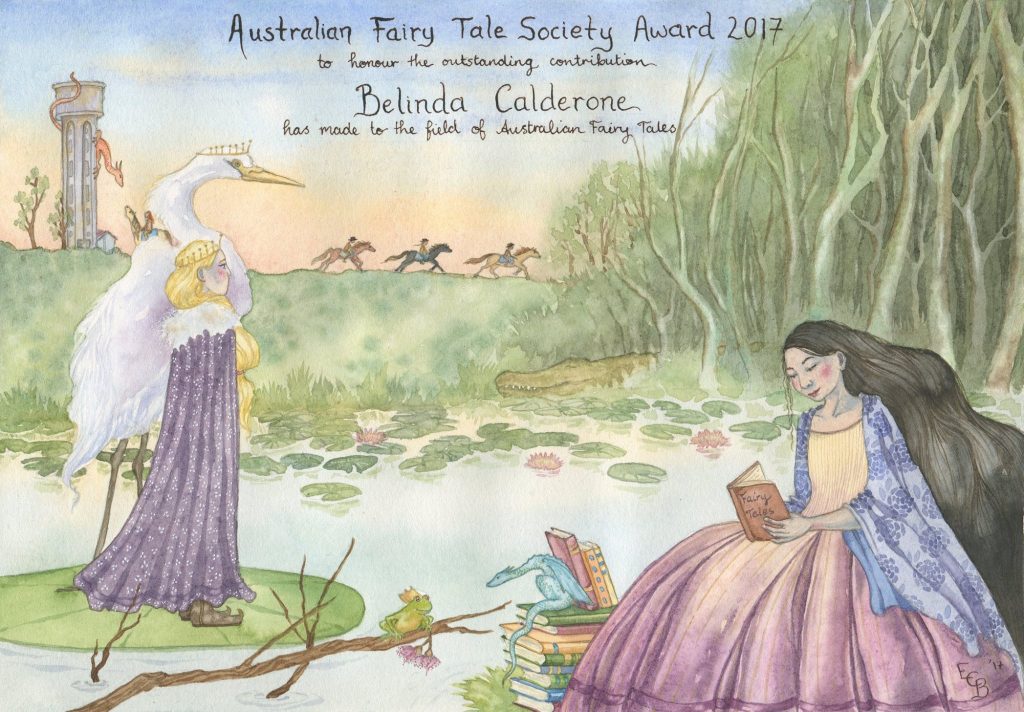