There were 343 site selection ballots cast, with 312 in favor of Winnipeg, as reported by Chicon 8. The Winnipeg bid was running unopposed after another bid for Orlando folded last month.

Winnipeg’s Guests of Honor will be Dr. Philip J. Currie, Julie Czerneda, John Mansfield, Waubgeshig Rice, Nisi Shawl and Katherina Vermette. The Ghost of Honor will be Lorna Toolis and the Toastmaster will be Tanya Huff. The convention will be chaired by Robbie Bourget and Linda Ross-Mansfield.

As provided by the WSFS Constitution, the same rules that govern the Worldcon, the NASFiC (North American Science Fiction Convention) is held in North America in years when the Worldcon is held overseas. In this case, the 2023 Worldcon will be held in Chendgu, China from August 16-20, 2023.

Winnipeg in 23’s website can be found at https://main.winnipegin2023.ca/; they can also be found on Twitter at @WinnipegIn23.

To Be Fair, I Was Left Unsupervised: A Disjointed Chronicle of 79th World Science Fiction Convention, DisCon III – December 19-20, 2021

(Author’s Note: As of this writing, I misplaced all of my notes for Day Four. The things I write about here may be a bit truncated, so please bear with me with this day’s events…)

I woke up relatively early (for a Worldcon), at around 8:45 a.m. Dapperly dressed in my Chelsea FC pajamas and socks, I decide to go down to the Information Desk for the latest Dis N’ Dat newsletter for the latest news and Programming changes.

Just as I exited the elevator, I encountered Laurie Mann and Dave McCarty in deep conversation. Mr. McCarty told me that he was on his way to the Site Selection Meeting and was particularly vexed because the contest between the Chengdu and Winnipeg bids was, as of this morning, in doubt.

This was a little peculiar because under normal circumstances, the identity of the winning bid would have been leaked the previous evening by unknown sources and would have been circulating among the parties last night.

But as I inferred from my earlier conversation with Ms. Mann and Mr. McCarty, this did not happen. By now, most of you may know that the statement from Kevin Standlee a few days earlier cast the election in doubt due to what was perceived by some as an infraction of the rules regarding the lack of valid addresses by those voting for the Chengdu bid.

To my understanding of the matter, a majority of  the Chengdu voters used as email address because that is how they interpreted the use of that term in China

Mr. McCarty, who is associated with the Chengdu bid, had no idea whether or not the disputed ballots would be allowed or not this morning.

Quickly realizing that either history, a controversy, or both was about to occur, I bolted to my room, got properly dressed, grabbed a tea and a protein bar and raced down to the Palladian Ballroom for the reveal.

The Site Selection Meeting had been scheduled for 9:30 a.m. but that passed by as the room slowly filled with interested parties.

[The rest of Chris’ report follows the jump.]

END_OF_DOCUMENT_TOKEN_TO_BE_REPLACED

The Winnipeg in 2023 Committee today announced their bid for the 81st World Science Fiction Convention. The bid has filed the required papers with the DisCon III committee inviting the Worldcon to return to Winnipeg for the first time since 1994.

The Winnipeg in 2023 bid is a committee of Cansmof, a Canadian not-for-profit corporation that specializes in running and sponsoring fannish events in Canada. The bid is endorsed by WINSFA Inc., which oversees KeyCon, an annual science fiction convention that has been held in Winnipeg since 1984 over the Victoria Day weekend each year. Although the 2020 and 2021 events are virtual for safety reasons, the 2022 KeyCon is planning an in person event again. More information about KeyCon is available at Keycon.org.

This bid was developed with the support of Tourism Winnipeg. The last Worldcon in Winnipeg generated an estimated Canadian $9M in economic activity and drew nearly 4000 attendees from around the world. The last Canadian Worldcon in Montreal in 2009 had similar numbers..

The Winnipeg bid is competing with Chengdu, Sichuan, China and Memphis, Tennessee to host the 2023 Worldcon

Copies of their submissions to Site Selection can be downloaded here.

More information about the Winnipeg bid is available from the committee’s website, winnipegin2023.ca. Direct queries for additional information can be sent to [email protected].

The chair may be directly contacted at [email protected].

Organization of the Bid

Loscon 42 co-chairs Robbie Bourget and Marcia Minsky have announced that the con is holding a Writing Contest for aspiring writers. Entries are being taken now.

There are three categories:

Prizes are still being decided.

We are looking for your best fantasy or science fiction between 500 and 1000 words; the youth and young adults may supplement their word count with illustrations (each one worth 50 words). We will be having a professional writer (to be named later) judge this competition.

All submissions must be received by October 31, 2015. Submit your entry to [email protected].

Sasquan has decided that Lou Antonelli’s letter to the Spokane PD about David Gerrold violated its Code of Conduct, but at Gerrold’s request set aside a decision to ban him for the reasons discussed in the following public statement.

The Executive Committee of Sasquan, the 73rd World Science Fiction Convention, would like to address the matter of actions taken by Mr. Lou Antonelli with regards to one of our Guests of Honor, Mr. David Gerrold. On August 1st, Mr. Antonelli participated in a podcast in which he stated that he had written a letter to the Spokane Police Department, in which he stated to them that Mr. Gerrold was “insane and a public danger and needs to be watched when the convention is going on”.

Normally, online communications between members is not something in Sasquan’s purview to referee. However, Mr. Antonelli’s letter, which requested police action against Mr. Gerrold during the time of the convention, is within our purview. As such, we found that there was a strong possibility this act was a violation of our posted harassment policy[1], particularly if the letter had, in fact, been sent.

The Executive Committee then turned the matter over to our Operations Head, Ms. Robbie Bourget, who initiated formal proceedings in accordance with that policy. During these proceedings, it came to light that Mr. Antonelli had issued a formal apology to Mr. Gerrold and admitted culpability: he actually sent the letter, not merely claimed to have sent it.

We thoroughly reviewed all available data, including email from both involved parties, social media postings, discussions with key committee members, and so forth. The inescapable conclusion was that Mr. Antonelli had violated our Code of Conduct in this matter. The recommendation was to refund Mr. Antonelli’s membership and prohibit his entry to any convention location or function.

However, after the recommendation was made, Mr. Gerrold, as the aggrieved party, specifically requested that the Executive Committee set aside this recommendation on the grounds that Mr. Antonelli did apologize, is sending a retraction to the Spokane Police Department and because, as a Hugo Nominee, he deserves to attend the ceremony.

The Executive Committee has chosen to accept Mr. Gerrold’s request, and considers the matter closed as of this time. Ms. Bourget has spoken and corresponded with the Spokane Police Department, and they also consider the matter closed. We would like to thank Ms. Bourget for the calm professionalism she lent to the proceedings, and Mr. Antonelli and Mr. Gerrold for coming to a settlement that benefits not just them, but the Worldcon and its members.

While some wonder why the committee has not taken official notice of Antonelli’s interaction with Carrie Cuinn as well, perhaps that is explained by the statement “online communications between members is not something in Sasquan’s purview to referee.”

Scenes at the 2014 Worldcon, shot by Francis Hamit: 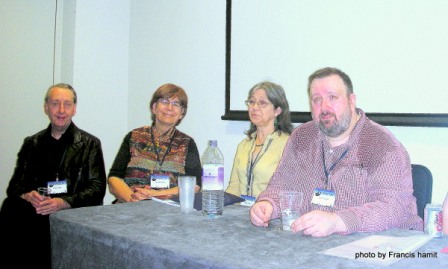 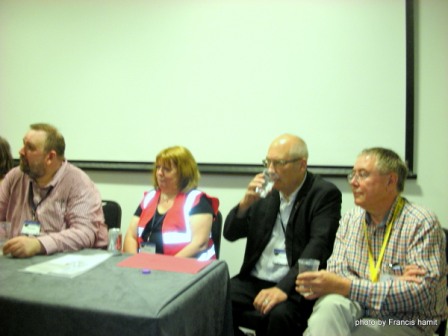 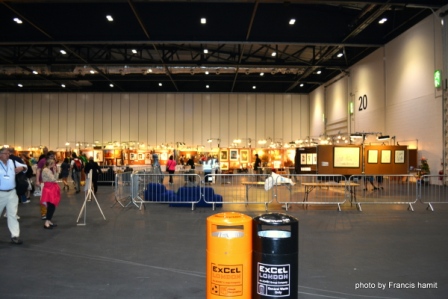 Inside the ExCel at Loncon 3. 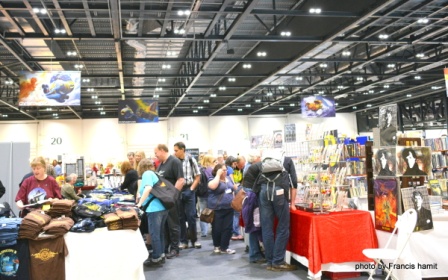 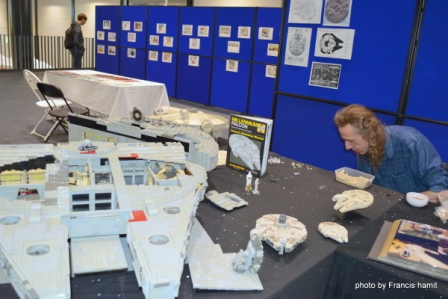 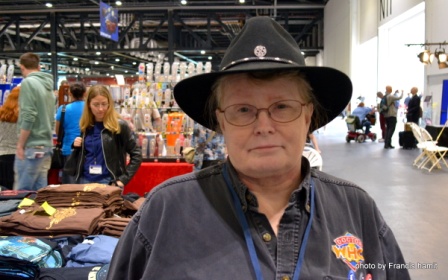 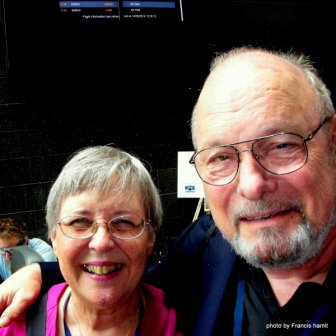 Gay and Joe Haldeman at Loncon 3.