(1) ALL SYSTEMS WIN. Martha Wells posted a Worldcon 76 report including her experiences at the Hugo Awards ceremony —

Then we got to novella, and I was extremely nervous. I felt like I had a strong chance and was hopeful, but it was still awesome to win. I managed to get up the stairs to the stage, give my speech without crying (After the Nebula Awards I didn’t want to be the author who cries all the time.) (I saved it all up for Monday, when every time anyone said anything nice to me, I would start crying.) Managed to get down the Stairs of Doom backstage with the help of about four people, got stopped to get a photo outside the auditorium in the reception area, went back in the wrong door and could not get it open and had to thump on it until the backstage people heard me, and then got back to my seat in time to see Nnedi Okorafor win for Best YA novel and N.K. Jemisin win for Best Novel!

And she has some Worldcon photos on her Tumblr.

(2) DIGBY IN ONE PLACE. The Golds reminded readers today about the extended electronic edition of Tom Digby’s amazing fanwriting that’s available online, “Along Fantasy Way”. Originally produced for the 1993 Worldcon where Tom was a guest of honor, the collection was expanded in its 2014 digital version. What a treasure trove of wonderfully creative idea-tripping. Delightful poetry, too – for example:

Pet rocks are OK, but some people prefer more variety.
The guy upstairs from me
Has a 1947 Chevrolet engine block.
I think his apartment is too small for it,
But there it is.
And the family down the street
With the goldfish pond in the yard
Has an old ship’s anchor
To keep the fish company.

But of all the inorganic pets in the neighborhood,
The happiest is an old beer can
Belonging to a small boy.
It would never win a prize at a show:
Too many dents
And spots of rust
And paint flaking off.
And besides, it’s a brand of beer
Most people don’t like.
But that doesn’t really matter.
What matters is FUN
Like afternoons when they go for a walk:
The can leaps joyously ahead
CLATTERDY RATTLEDY CLANG BANG!
Then lies quietly waiting for its master to catch up
Before leaping ahead again.
I may get a beer can myself some day.

But I still don’t think it’s right
To keep a 1947 Chevrolet engine block
Cooped up in such a small apartment.

The collection is illustrated by Phil and Kaja Foglio.

(4) GUNNED DOWN. You could see this coming. The Hollywood Reporter says “‘Guardians of the Galaxy Vol. 3’ Production Put on Hold”. The studio still expects to make the movie later on.

Sources say that crewmembers, which is, at this stage, a small group that was prepping for preproduction, are being dismissed and are free to look for new work.

But Gunn was let go as the director in July when old tweets were resurfaced in response to his vocal political posts. While some held out hope that the director would be given a reprieve by Disney, a mid-August meeting with Disney chairman Alan Horn closed the door on that.

(5) LAST DAYS OF BANG ON EARTH. Big Bang Theory has started production of its final season.

"Big Bang" will end after this season! #TBBT pic.twitter.com/tMbhvzas9X

Let What Culture tell you Why The Big Bang Theory Just Got Cancelled.

speaking of statistical improbabilities, did you guys know that 10 percent of all ever Hugo Awards for Best Novel have been awarded to guys named Robert
(this is factual information)

(7) HOW THEY STACK UP. Rocket Stack Rank’s Eric Wong writes:

With the recent release of the TOC for the Best American Science Fiction & Fantasy 2018 (BASFF), I’ve updated RSR’s 2017 Best SF/F Anthologies article with the 20 stories in that anthology plus their honorable mentions.

The grand total from five 2017 “year’s best” SF/F anthologies is 114 stories by 91 authors, from which we can make the following observations:

To see other outstanding stories that didn’t make it into the five “year’s best” SF/F anthologies, go to RSR’s 2017 Best SF/F article, which has also been updated with the BASFF stories for a total of 256 stories by 201 authors.

Launched into a solar orbit on Aug. 25, 2003, Spitzer was the final of NASA’s four Great Observatories to reach space. The space telescope has illuminated some of the oldest galaxies in the universe, revealed a new ring around Saturn, and peered through shrouds of dust to study newborn stars and black holes. Spitzer assisted in the discovery of planets beyond our solar system, including the detection of seven Earth-size planets orbiting the star TRAPPIST-1, among other accomplishments.

(12) OH NO, WHERE CAN THE MATTER BE. Gizmodo reports “Scientists Will Soon Drop Antimatter to See How It Behaves in Gravity”.

In a new study, physicists attempted to find differences between matter and antimatter—confusingly, also a kind of matter, but with the opposite charge and other differences. It’s like an evil twin. Confusingly, the universe has way more matter than antimatter, for no clear reason. Physicists haven’t found the specific differences they were looking for when studying the antimatter version of hydrogen, called antihydrogen, but they have demonstrated a way to study antimatter better than ever before.

Mike Kennedy forwarded the link with the note, “It’s a complicated story, and mostly about recent measurements of the Lyman-? emission lines of anti-hydrogen… in particular it being the same wavelength as for hydrogen <http://www.nature.com/articles/s41586-018-0435-1>. The bit about laser cooling anti-hydrogen and dropping it to observe how it reacts to gravity is IIUC speculative at this point.”

The legendary actor and musician William Shatner is giving us another reason to be excited about the holiday season. Shatner tweeted the Amazon link to pre-order his first upcoming record: Shatner Claus The Christmas Album. You can add the self-described godfather of dramatic musical interpretation’s album digital audio, CD, or vinyl in your letter to the North Pole. With vinyl record sales on the constant rise, it’s exciting to see if this will find Shatner Claus’ sleigh riding its way to the top of the Billboard charts.

(14) JURASSIC BLETCHLEY PARK. In “Dinosaur DNA clues unpicked by researchers at University of Kent”, scientists are theorizing-from-clues that dinosaur DNA, like birds’, had many chromosomes, making mix-and-match easier.

Researchers at the University of Kent say their work uncovers the genetic secret behind why dinosaurs came in such a variety of shapes and sizes.

This variation helped the creatures evolve quickly in response to a changing environment – helping them to dominate Earth for 180 million years.

But the researchers behind the DNA work say they have no plans to recreate dinosaurs, Jurassic Park style.

(15) FLAME OFF. BBC assures us, “Yes, Antarctica has a fire department”.

But fighting fires in freezing temperatures also calls for some specialist equipment.

Surprisingly, water is still an option. McMurdo’s fire engine has a pump, which cycles water constantly through the vehicle to prevent it from freezing.

Remembering to set the pump going is, says Branson, a lesson quickly learned.

“You do not want to be the person who freezes all the water in the fire engine. Then you’re stuck with a 500 gallon engine with an ice block in it… and nobody on base is going to like you.”

A bear was filmed going through the lobby of the hotel that inspired Stephen King’s classic horror novel in Colorado.

(17) YOUR MILEAGE MAY VARY. While excavating on YouTube, Carl Slaughter found Frankenstein Meets the Space Monster (1965): “Frankenstein, ie, Frank the android, does battle with a Martian beast to prevent a Martian princess from replenishing Mars with voluptuous and sometimes bikini-clad Earth women.  The Pentagon monitors the situation and tries to lend Frank a hand.  Turns out Frank wears an Air Force uniform and holds military rank  – like Data.  This is in the so bad it’s good category.” 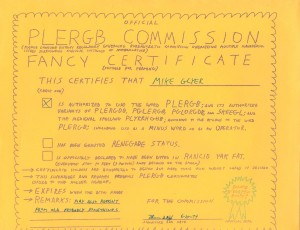 I came across my P.L.E.R.G.B. Commission certificate from 1974 and a dittoed copy of the Constitution and Bylaws, both on blazing goldenrod paper.

John Hertz described the deeply mystic fanhistoric context of it all in What Do You Mean, Plergb?

By John Hertz: Your readers might want to know what “Plergb” means.  If so they would not be alone.

It was introduced by Tom Digby during his days in APA-L (Am. Publ. Ass’n – LASFS; LASFS the L.A. S-F Soc. having been the host of L, though not the sponsor, more than forty years now).  He was Fan Guest of Honor at ConFrancisco, the 1993 World Science Fiction Convention; his GoH book Along Fantasy Way was edited by Lee Gold and can still be obtained from her, lee.gold (at) ca (dot) rr (dot) com.

The alien in Niven’s “What Can You Say About Chocolate-Covered Manhole Covers?” (1971) is Digby’s analogue.

Digby taught us of the Plergb Commission (not its real name).  That “not its real name” is another APA-L running gag.  In this case it is because the real name is P.L.E.R.G.B.C.O.M.M.I.S.S.I.O.N. = Plergb Language Entropy Regulatory Governing Bureaucratic Commission Overseeing Multiple Managerial Issues Surrounding Singular Instances of Nomenclature.

The by-laws provide, “The word Plergb may be used in many ways, some of which have not been discovered yet.”  Thus explaining is customary, e.g. “Plergb, defined as having corrected all the typographical errors in this comment”, or  “Plergb, defined as a pair of robot musicians”.

Also “‘Plergb’ is always capitalized because it is the name of the word Plergb.”

Also we have been informed of the medieval spelling, Plyrrhghb.  Also the eternal question, and its answer, namely Glorb g’dorpt-borpt?  Plergb.

Tom Digby is a fan writer without parallel. He’s quite literally a science fiction fan writer, who begins with an idea and teases it in every possible direction as hard sf writers do. The sf writer weaves those results into a story, while Digby uses his humorous extrapolations as trail markers in a meta-discussion about his imaginative process.

I’ve been working on a story idea involving characters who get in trouble exploring the abandoned ruins of a wizard’s castle.  This led to thoughts of whether there should have been warning signs posted, and if so, what they might look like.

Then Tom insightfully classifies the kinds of threats players encounter in a dungeon game and the appropriate warning sign for each. Crazy and funny.

Tom was such an early adopter of electronically-distributed fanac that Silicon Soapware’s all-text format looks quaintly antique, as if it might be truly at home on a 40-column greenscreen.

That’s all the more reason for me to be intrigued by Tom’s new project – posted to YouTube, for goodness sake! – a series of animations (for certain values of animation) titled “Plergb, defined as a pair of Robot Musicians”.

Flower Head Robot and Moon Tune robot used to be ordinary robots. They had ordinary dull gray paint jobs with dull black serial numbers stenciled on their dull gray chests, and all they ever wanted was to do as they were told, dull gray day after dull gray day.

What happened to turn them into songwriters and performers is explained in two animated music videos.

In the “Robot Musician Introduction” song they sing:

“We weren’t always robot musicians / We used to be demolition robots… Since we were designed for tearing down buildings / Our musical abilities are somewhat limited.”

And in the “Singing About Love” song Flower Head Robot and Moon Tune Robot explain why they’re always saying they’re in love even though they have no idea what love is.

It’s a put-on, it’s a parody: in short, if you missed the Sixties be of good cheer – they are still in full swing at Tom’s website.

[Thanks to Dan Goodman for the link.]