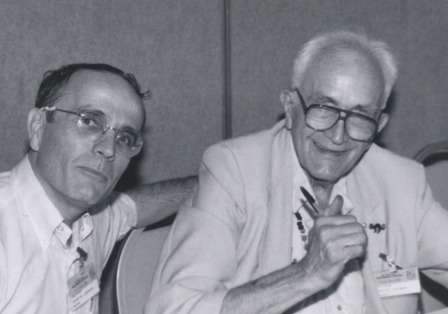 Justin Leiber and his father, Fritz Leiber Jr., from a 1980s World Fantasy Convention. Photo by and Copyright © Andrew I. Porter.

Justin Leiber’s article about his father, “Fritz Leiber and Eyes,” first published in Algol/Starship in 1979, was reprinted by Earl Kemp in eI and can be read here.

…[In the summer of 1968] we were to see him at Clarion and then he was to visit us in Buffalo. I had just finished reading Fritz’ A Specter Is Haunting Texas, then serialized in Galaxy Magazine.

The specter in question is a tall and very thin native of the satellite communities who most wear a support exoskeleton to visit a Texas which some two hundred years hence has annexed much of North America. Scully, an actor by profession, becomes a useful symbolic figure in the bent-back revolution against the ruling class of Texans, who use hormones to reach Scully’s eight-foot height without mechanical support….

Scully, artist-actor like Fritz, does not change the world—he reflects it darkly. (The Communist Manifesto begins “A specter is haunting Europe, the specter of Communism …” I asked Fritz whether anyone in SF had noticed the source of his title. He said no.)

When I saw Fritz that summer of 1968 he was sporting all of 140 pounds on his six-foot-five frame—a mighty gaunt reduction from the accustomed 200 or so pounds. He was Scully, or so it seemed to me. He had the somewhat silly giddiness of Scully. And he was putting on a crazy dramatic act (at Clarion anyhow). I still have a clear vision of this cadaverous scarecrow capering about and teaching fencing at a drunken backyard party at Clarion….

At the Campbell Conference in 2001, when Fritz Leiber was posthumously inducted into the Science Fiction and Fantasy Hall of Fame, Justin Leiber was present to accept on behalf of his late father and participate in the rest of the conference.

Gregory Benford wrote on his memorial page, “He had deep knowledge of science fiction and informed his long view of it, learned also from his elegant father. He carried this into the Byzantium of philosophy with great insight.”

Leiber, unfortunately, found his academic colleagues were less accepting. On a panel at the 1988 Worldcon in New Orleans, wrote Evelyn Leeper, “Justin Leiber gave a long description of his experience with teaching a writing course at a college with a creative writing program. The fact that he was a successful author was bad enough, but that he was a successful science fiction author meant he was a total pariah.”

Leiber was the birth father of ArLynn Presser, who wrote romance novels under the pen name Vivian Leiber. In 2011, the Chicago Tribune ran a profile about her with some poignant family history:

Given up for adoption just before her third birthday, she endured a rocky childhood with her adoptive family and, later, in foster care…

[Her] biological father, Justin Leiber…, too, is a Facebook friend, whom she first tracked down through a private detective when she was 25. For her Facebook experiment, she traveled last winter to see him in Tallahassee, where he is a philosophy professor and writer.

A video post from that trip shows Presser retreating to a bathroom after her father guided her through the photos in his office; not one was of her or her sons. “I thought I was coming here because, well, yeah, he’s my Facebook friend, but I thought I was his daughter,” Presser says tearfully in the video. “He is just a guy who has a family, and I’m not part of that family.”

However, she was included in the family obituary published this March, named among Leiber’s survivors:

He was the beloved husband of Barbara R. Foorman of Tallahassee, FL; and father of KC Leiber of New York City and Arlynn Presser of Chicago, IL; and grandfather of Joseph and Eastman Presser and Jonquil Leiber-Wyatt.