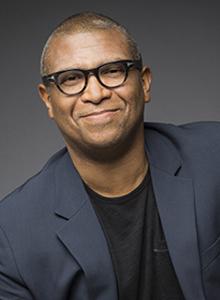 Reginald Hudlin is an innovator of the modern black film movement, having created, written, and/or directed such films as House Party, Boomerang, and BeBe’s Kids, which are some of the most profitable and influential films of his generation. Hudlin received a Best Picture nomination for producing Quentin Tarantino’s Django Unchained. The film won multiple awards, including two Oscars and two Golden Globes. Hudlin is the executive producer and writer of the Black Panther animated series, based on his comic book series. He also wrote an award-winning run of Spider-Man and the Django Unchained graphic novel. In addition, he was executive producer of The Boondocks animated series and served as entertainment president of the BET Network from 2005 to 2008.

He was presented the award on July 11. (File 770 is late in reporting this because SDCC did not update the Icon Award webpage.)