Aussiecon 4, the 2010 Worldcon, is taking reservations for space in the Art Show and Dealers Room. Instructions for applying can be found at the official web site: www.aussiecon4.org.au.

Full text of the press release appears after the jump.

END_OF_DOCUMENT_TOKEN_TO_BE_REPLACED

Ray Bradbury’s Merry Christmas 2116 follows Mr. & Mrs. Wycherly as they celebrate their fortieth wedding anniversary.  It seems they are both disillusioned with their reflections in the mirror and wish they could do something to help their spouses as they age.  Enter Mr. Marionette, who arrives just in time to help the aging Wycherlys find the perfect Christmas gift for each other. What follows is pure Bradbury charm, wit and mystique. Told entirely through song and dance, this new musical is perfect for both Halloween and Christmas.

Performances will be presented at the Festival of Arts Forum Theatre in Laguna Beach as scheduled through November 15. Tickets can be purchased online at www.gallimaufry.org/buytickets.html or by calling (949) 499-5060.

For all you fans who are obsessed with this troubling question, Bill Willingham explains why we’ll never have the jetpack future portrayed on pulp magazine covers:

Here’s the thing: we want more safety now than we did then. We expect it. Hell, we demand it…. The problem with jetpacks and flying cars is that they aren’t already 100% safe to all potential users. They don’t get, and never will get, the time to develop and perfect that we’ve given our airplanes and ground cars. We have our jetpacks and flying cars and we simply aren’t going to use them….

In his Known Space series of novels and stories, the vastly talented and industrious science fiction author Larry Niven created a race of aliens called the Pierson’s Puppeteers. …They are a species of genetic and cultural cowards. More than anything else they are motivated by the desire, by the all-encompassing need, to be safe….

I’m afraid that’s who we’ve chosen to become… We had our chance at a jetpack future but turned them down.

Better find my unbreakable mirror and count my heads….

Ben Bova listed the people he credits for helping him make it as a professional writer in an article for the Naples News:

No writer stands alone. We all owe our success, such as it is, to those who taught us, inspired us, helped us understand and persevere.

Editor John W. Campbell figures prominently in that list. Bova sold him several stories before meeting him face-to-face at a Worldcon in Washington, D.C. After shaking his hand, Campbell provocatively said: “This is 1963. No democracy has ever lasted longer than 50 years, so this is obviously the last year of America’s democracy.”

Bova dredged his memory to come up with the Jeopardy!-style question that matched Campbell’s bold declaration. And he guessed right. Can you? Click the link to check your answer.

The Los Angeles Science Fantasy Society threw its 75th anniversary bash at the Castaways in Burbank on October 23. Perched high on a hillside our banquet hall had a vast scenic window opening onto a magnificent view of twinkling city lights. It was the perfect place for us, halfway to the stars.

Master of ceremonies John Hertz had not dressed like Beau Brummell (though he sometimes does) which he emphasized by pointing out “This is one of the rare occasions when Len Moffatt is better dressed than I.” John did wear his beanie, however, when he introduced our first speaker, Roy Test.

Roy at last got the attention he’s always deserved as one of the club’s founding members. The late Forry Ackerman was also present at the club’s creation in 1934 and was such an influential part of LASFS history as well as its most polished raconteur that he was able to fully satisfy people’s curiosity about the past. (I snapped a photo of Ackerman waving for the camera at the club’s 70th anniversary, only later discovering Roy Test was there and by luck I had captured Roy walking past in the background of the same picture.) However, Roy’s story is quite interesting in its own right.

After Hertz helped him up to the dais Roy joked, “I was a little more agile when I first started reading sf stories.” He remembered a preliminary club meeting at a movie theater one afternoon. And most of his memories are of meetings at Clifton’s Cafeteria when he was 13 or 14 years old. He remembered the green drink circulating in Clifton’s fountain. He said his mother, Wanda Test, volunteered to be club secretary as a way to come to the meetings “and see what kind of oddballs I was associating with. Maybe it didn’t occur to her I was the oddest one there.”

(According to Forry Ackerman in Mimosa: “That very first meeting of all was attended by nine people. There was a young fan named Roy Test; he was interested in Esperanto, so we called him ‘Esperan-Test’. His mother, Wanda Test, was our first secretary. In those days of the 1930s, Thrilling Wonder Stories was on our minds, so her minutes became known as ‘Thrilling Wanda Stories’.”)

Roy remembered discovering a used bookstore with a trove of very early sf pulps selling for 15 cents each. He worked at a gas station for 10 cents an hour, so every hour-and-a-half he could buy another copy from the magazine’s first year of publication.

Within a few years World War II started, and Test went into the Army Air Corps and piloted B-17 bombers. He is, in fact, still an active flyer in the Commemorative Air Force (see photos of him in uniform here and here.) Roy said he occasionally flies a Russian paratroop plane, the largest single-engine biplane in the world. By coincidence, my family had toured the Planes of Fame museum in Chino a year or so ago and I saw some items donated by Roy on exhibit — the first time I knew that part of his story.

Roy was followed by Len and June Moffatt. It was great to see them together – they’ve been part of LASFS for around 60 years. Other speakers included John DeChancie, Karl Lembke (Chair of the LASFS board of directors), Mel Gilden, Laura Brodian Freas, Larry Niven and Jerry Pournelle.

Larry Niven said in 1963 he decided he was going to be a writer and took the Famous Writers School correspondence course. He was then 25 years old. Having met Ray Bradbury years before (when they had the same doctor) he wrote for advice, was referred to Forry Ackerman and ended up attending LASFS meetings at the Silver Lake Playground. That opened the way to all kinds of adventures, and to meeting his future wife at the 1967 Worldcon. Larry said that Fallen Angels (written with Pournelle and Flynn) embodied what he felt about fandom.

Jerry Pournelle quoted Heinlein to the effect that authors who read their own works in public probably have other nasty habits, but he agreed with Niven’s sentiments about Fallen Angels. He too had joined LASFS in the Silver Lake days, when Paul Turner was promoting the idea that we’d someday own our own clubhouse. Jerry said he grew up with a future – “I knew in the 40s I would live to see the first man on the moon. I didn’t know I’d live to see the last one.” Although the future isn’t what it used to be, “I think it’s still there… One of these days we’ll find people who do believe it and we will get our future back.”

I shared a table with Milt Stevens, Marc Schirmeister and Joe Zeff, and also enjoyed seeing a lot of other long-time friends.

Thanks to Christian McGuire and Arlene Satin for their excellent work organizing the event. And also for publishing the incredible 75th Anniversary Memory Book. What a treasure that is!

Jeffrey Weiss at Politics Daily wishes the media had applied the wisdom of Ray Bradbury to the “balloon boy” saga:

It will never happen, I realize. Too much money. Too much publicity. But I know what I’d like to see happen to the man who set up the “Balloon Boy” hoax…. Science fiction writer Ray Bradbury offered the prescription back in 1969 in a short story called “Downwind From Gettysburg.” This is a tale of a man who builds a mechanical, computerized Abraham Lincoln exhibit — which a publicity hound named Booth shoots and wrecks. Here’s what the creator of the Lincoln robot does to punish Booth:

“It never happened, Mr. Booth. Tell your story, but we’ll deny it. You were never here, no gun, no shot, no computer data-processed assassination, no outrage, no panic, no mob. Why now, look at your face. Why are you falling back? Why are you sitting down? Why do you shake? Is it the disappointment? Have I turned your fun the wrong way? Good,” he nodded at the aisle. “And now, Mr. Booth, get out.”

John King Tarpinian writes: “On October 24th Ray attended two events. First, at Every Picture Tells a Story he hosted the unveiling of a limited edition print of Dark Carnival.

“The second event was a big screen viewing of Something Wicked This Way Comes at the Aero Theatre in Santa Monica.”

The Ray Bradbury Board has a full set of photos.

Joe Haldeman’s improving apace – wheeling himself beside Gay to the cafeteria, talking with a visiting friend, practicing his handwriting. Gay Haldeman quoted Joe’s new poem to readers of SFF.net:

The pancreas, a curious beast
Has functions hard to scry.
It sits around for sixty years
Then tries to say “bye-bye.”

Paul Turner set the vision for the LASFS to own its meeting place when he convinced the club to start the Building Fund. He could not attend the club’s 75th anniversary banquet on October 23 but sent along some reminiscences to be read by the evening’s Master of Ceremonies John Hertz. The full text appears after the jump.

END_OF_DOCUMENT_TOKEN_TO_BE_REPLACED 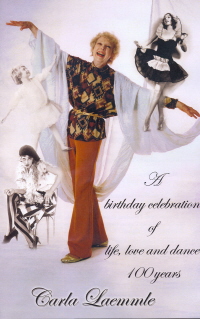 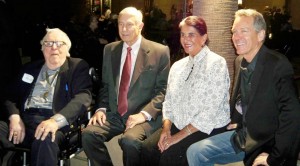