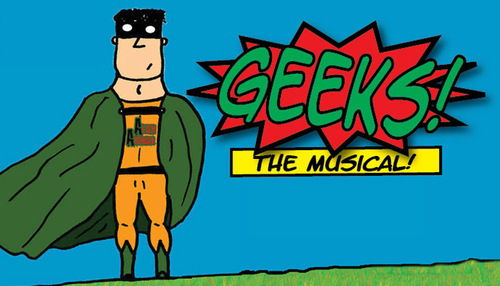 By David Bratman: File 770 sent me to the theater, so I ought to owe it a review.

Back in May, Mike blogged about an upcoming production in San Diego of a show called Geeks!: The Musical. Hey, I thought, Berni and I plan to be in San Diego while this is on, it might be fun to go.

Finding tickets was not the easiest thing. Mike’s main link was to a casting call on the site of the theater company that was hosting the show but not producing it, so they posted no further information. Fortunately the show had a separate website which was eventually updated with a ticket-purchase link to the San Diego production. It’s at http://www.geeksthemusical.com/. The story is set at Comic-Con, and it’s running through the real-life con and on to August 16.

We knew we were in for a low-rent job when we could hardly find the tiny theater, tucked behind a dry cleaner in the Hillcrest District, and when the door didn’t open to the waiting ticketholders until the supposed showtime, despite the flood of production personnel and cast members rushing in and out. On the other hand, once the door opened the show then got started in ten minutes, which you can do in a sixty-seat theater on a slow Thursday when it’s only half-full.

Let’s say what we can for it. The music, by LASFS’s own Ruth Judkowitz, was lively and tuneful. The accompaniment, prerecorded on keyboard by one of the cast members, worked functionally – there was only one minor production slipup in this performance – but it was overloud and sometimes drowned out the singers. The script and lyrics, by Thomas J. Misuraca, were very clever and often tickled my fancy.

The story takes place over several days at a Comic-Con, though it could be any large generic media-oriented SF con – the coincidence of running into somebody and the difficulty of finding them when you’re looking for them plays some role in the plot. It’s the story of three pairs of friends who come to the convention, one set specifically in hopes of selling the avant-garde comic they’re working on, the others to buy collectibles or to attend programming or just to people-watch. They interact, and romantic pairings, both straight and gay, ensue.

There’s lots and lots of references to media favorites, frequently in the form of metaphors, so even if you don’t know the referent you’ll probably get the point. But I got almost all the referents, so I’ve no doubt that most F770 readers minded to go will have no trouble. There’s a whole song in which one enthusiast tries to teach the rest of the characters the sequence of Doctors Who, but the rest of the songs are not quite that doggedly educational.

I was particularly caught by a couple of true geekish interactions in songs. One character makes a reference to Harry Potter’s cape and another actually interrupts the song to point out that it was a cloak, to which the first snaps, “Poetic license.” In another song, two characters are trading names of shows and authors to see if they have any mutual likes; when Tolkien comes up, the exchange is “Have you ever actually read him?” “No, but I saw the movies.” I’ve previously come across the claim that The Lord of the Rings is too hard a book to read, and I’d like to know to what extent that assumption is actually a thing in geek culture.

Berni was particularly pleased with a song in which the two female characters, a fangirl played by Sarah LeClair and a goth wanna-be writer played by Lorina Alfaro, extol female heroes. (That there aren’t a lot of women at the con is one aspect of the plot that’s perhaps a little unrealistic today.) I was equally taken by the solo song from a flamboyantly gay snob, played by James P. Darvas, whose refrain was “I Hate It” – “it” being just about any work you could mention. As a snooty critic myself, I could identify with that part. Many of the songs were appealing, though we could have done with less blatantly in-your-face declarations of sexuality.

Cast quality was mixed. LeClair as the romantic female lead was a good singer and a perky actress; she was also responsible for the pre-recorded accompaniment. Darvas is a very strong actor and dominated the stage whenever he was on. Probably the best in both singing and acting was the oldest member of the cast, Ed Hollingsworth as the seventh main character, a washed-up actor who’d once starred in a popular SF tv show decades ago, and who’s come to the con to make a few bucks selling autographs and in hopes of finding that he still has a few fans. His duet with LeClair was the most professional number. Unfortunately it’s not a good sign for a show when the male romantic lead is the worst singer, not even ready for a high-school show, let alone prime time, so let’s just pass over him anonymously.

So there were places where we winced, but a lot was also enjoyable. Thumb down from Berni, but thumb up from me as long as you expect what you’re getting.

Diana snapped this photo of the Not-Ready-For-Mythcon-Players in action at Mythcon XXXIX last weekend. Adhering to a long-standing tradition, the troupe always appears in bedsheets, worn either as togas or cloaks. Their legendary comedy has even warranted a mention in the pages of the New York Times.

Update 8/24/2008: Thanks to Wayne Hammond for the full, corrected list of Players, and his description of the action (see his comment below).