By James Bacon: I have spoken to John Vaughan, regarding Victory and it appears the show fell at the first hurdle, but he is not at all demotivated by this:

Sadly I have to report that “Victory?” has been eliminated from this year’s Storyland. It seems not enough people voted for the show itself to avoid elimination from the first round…

But am I down hearted?… No! Because we managed to convince RTÉ to attempt a science fiction series, something never done in their fifty-year history. In a single week our little six minute drama got over Three Thousand viewers and that’s what I wanted, not a show to vote for but a show set in Ireland (a locale hardly ever featured in science fiction) for fans to watch and enjoy and with the thousands of positive responses we got through Facebook I know we succeeded. It reached a point where fans have stepped forward and have offered financing to continue the show. (Unfortunately under the rules RTE own the show completely and will not allow it). So to every single one of you that watched us and supported us should be proud of what was achieved with a budget of £6000.

Many thanks to all the fans who supported us, we are very grateful.

In the 1980s Schander was active as a fanzine publisher and conrunner.

By profession he was a marine biologist on the faculty of the University of Bergen, Norway and only a year ago was named director of Bergen’s University Museum.

Schander helped organize RegnCon 1981, where unbeknownst to him, an imposter claiming to be Canadian fan Bob Webber  told people he had flown into Sweden for the con. The fake Bob Webber was shown a great time and asked to give a speech on the program, where he revealed his true identity. The stunt was detailed by Engholm for Mimosa 14.

Nachu Bhatnagar, a terminal cancer patient, had a wish – to find out how Harry Turtledove’s series The War That Came Early would end. His friend used the Reddit community to broadcast that wish and in the end Harry Turtledove answered the call.

See the video of Nachu receiving a galley of the latest book in the series [YouTube file]. Turtledove has also agreed to a phone conversation where he will discuss what will happen in the books to come.

This story is especially interesting to me because the day the original request was posted it was some non-fan friends I know through an online sports simulation site who brought to my attention the call for help in reaching Harry Turtledove. They asked “Don’t you know him?”

Harry’s so accessible and easygoing I felt sure he’d want to know about this. As it happened, the hours that passed before I got their message were enough time for Harry’s own daughters to see the request and take care of forwarding it themselves. It’s no surprise that Harry was touched by the situation and helped that fellow’s dream come true.

[CERN physicists] beamed muon neutrinos from an accelerator at CERN outside Geneva to a detector at the Gran Sasso National Laboratory in Italy, about 450 miles away, to see how many showed up as a different type, tau neutrinos. Neutrinos come in a number of types, and have recently been seen to switch spontaneously from one type to another. The neutrinos in the experiment were detected arriving 60 nanoseconds sooner than if they’d been traveling at lightspeed.

Now Science magazine’s website is blaming the result on a bad connection in a fiber optic cable connecting a GPS receiver (used to correct the timing of the neutrinos’ flight) and a computer.

Jerry Pournelle answered the latest findings on Chaos Manor with this comment:

The applicable Pournelle’s Law was one of troubleshooting: 90% of the time it’s a cable. I first formulated that back in S-100 days, and it’s still true. Now it may be that we’re better off without faster than light neutrons, but I for one regret that they’re going away. Of course this was always the way to bet it, but it was a more intereresting universe when everything we thought we understood was fundamentally wrong…

I applaud that attitude in a hard science fiction writer. And it seems CERN’s scientists themselves may not be finished with the question. CERN’s OPERA team, the group doing these experiments, say the faulty cable could have led to an undercalculation instead, meaning the neutrinos may have exceeded lightspeed by an even greater margin than previously suggested:

“The optical fiber connector … brings the external GPS signal to the OPERA master clock,” explained the science lab, and it “may not have been functioning correctly when the measurements were taken. If this is the case, it could have led to an underestimate of the time of flight of the neutrinos.”

On the other hand, another equipment issue under review may restore the mundane universe to status quo ante:

A second issue with the study involves an oscillator used to provide the time stamps for the GPS synchronization. Flaws with that gadget may have led to an overestimate of speeds — keeping neutrinos in line with Einstein’s theories.

There were probably some big fans of Harlan Ellison who nevertheless were unwilling to sit through a whole episode of Scooby-Doo to catch his 2010 appearance in the cartoon series.

Thank heavens for YouTube! Click here to see the 30-second clip of Harlan (as himself) conversing with “H.P. Hatecraft” in the episode titled “Shrieking Madness.”

[Thanks to Andrew Porter and Moshe Feder for the link.]

“Did Hitler Have a Secret Son?” asks the headline. Jean-Marie Loret, a Frenchman who died in 1985, spent much of his life trying to verify his mother’s claim that Adolf Hitler had gotten her pregnant during World War I. The story was retold by Loret’s attorney, now an old geezer, for a French paper last week.

Drumming up interest in Loret is undoubtedly part of the advance publicity for the revised edition Loret’s book, Your Father’s Name Was Hitler, said to be on the way.

It was that particular detail that set me thinking. Loret wrote a book trying to convince the world he was the son of one of history’s most loathed figures. In real life, offspring of Infamous parents may write autobiographies capitalizing on their connections. Stalin’s daughter did, too, for example.

Truth is stranger than fiction.

After seeing Luke Skywalker’s horrified reaction to the villain’s parental claims in The Empire Strikes Back, the last thing audiences would believe is Luke spending his time in sickbay dictating Darth Vader Is My Dad.

Or anyone who’s familiar with Rafael Sabatini’s Scaramouche knows perfectly well that the hero, revolutionary French lawyer Andre Moreau, did not depart his last encounter with the Marquis de La Tour d’Azyr filled with a burning desire to publicize that connection.

But Hitler’s and Stalin’s kids want you to know. A funny world we live in.

Jim Hines used humor effectively to make a point about book cover art in a post where he photographed himself imitating the poses of female characters on fantasy book covers, with notes on how difficult or painful he found each one.

My sense is that most of these covers are supposed to convey strong, sexy heroines, but these are not poses that suggest strength. You can’t fight from these stances. I could barely even walk.

It’s easy to think that because men look absurd in “women’s poses”, women would look absurd in “men’s poses”. Instead, these comparisons make it clear that there are absurd poses and reasonable poses, and we need to ditch the absurd ones altogether and use the reasonable ones for everyone.

The examples Hines analyzes are pretty mild – none of that 1930s brass brassiere stuff, just some women wielding swords and some others in confident poses. And nobody’s objecting to putting images of women on book covers per se, although I sense a tension between Hines’ avowed focus on marketing, and Fox’s call for a new orthodoxy requiring all cover poses to be “reasonable,” which seems to have a different political center of gravity.

Hines’ choices to advance his case inventively, and to write in a lightly mocking tone, are more helpful in luring an audience. While he delivers more than one layer of meaning, if his goal is to change an artist’s future work it may suffice to plant the simple idea that unrealistic poses make bad art.

Of course, Hines will be up against art history, which teaches that it’s not true that unrealistic poses make for bad art. Sometimes they make for highly-regarded art. Consider two examples, one by the French sculptor Rodin, the other by an unknown Olmec artist:

Bacchus in the Vat by Rodin

Acrobat by an Olmec sculptor

Is Hines’ primary concern whether artwork helps sell books? Then military realism does not trump everything else. Anything that makes commercial art successful cannot be indicted out of hand. Physically demanding, acrobatic poses may be eyecatching for their implicit difficulty, or for their resonance with famous images in the reader’s experience. If the cover engages a prospective buyer’s attention, hasn’t it done its work?

Postscript 1: One of Hines’ targets is the artwork on the cover of John Ringo’s Queen of Wands. Upon seeing this, my first question wasn’t whether the pose was physically awkward, but why a book named after a Tarot card features art more appropriate to the Two of Swords? Why doesn’t that undermine the cover’s effectiveness as a marketing tool? Because as little as I know about Tarot, most people know even less? Thus I am forced to raise the question of whether complaints from people with specialized knowledge – like whether a particular stance is good for swordfighting — come from such a trivial slice of the audience that they have no effect on sales at all?

Postscript 2: If military realism really does trump everything else – wasn’t the most realistic use of the sword in combat illustrated in the first Indiana Jones movie? That is, don’t bring a knife to a gun fight? Ergo, there should never be a blade on a book cover. 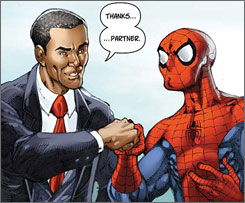 The steampunk-themed adverising campaign for The Seeker Wines was pointed out by James Hay on the ConDor list.

At right is balloon pilot Captain Cornelius Weatherbee, associated with the Sauvignon Blanc:

Captain Cornelius Weatherbee was a restless reed of a man with a winning personality. With his tricorn hat and thinly-curled moustache, his appearance on the horizon cowed even the heartiest of men. Yet belying this gruff exterior, his clever machine was forever lifted by winds, no matter which direction they blew. Backed by spirits unknown, he was propelled by this wind, riding their drifts toward whatever – or whoever – needed finding. Some say Weatherbee was a mindless wanderer, a man with his head in the clouds and not a penny of sense. And to that we say, Indeed, he was. And a truly great one.

And the ads for other wines feature characters and stories of their own.

The 2012 Nebula Awards nominees have been announced by the Science Fiction & Fantasy Writers of America.

The winners will be announced at the 47th Annual Nebula Awards Weekend, being held May 17-20 in Arlington, Virginia.